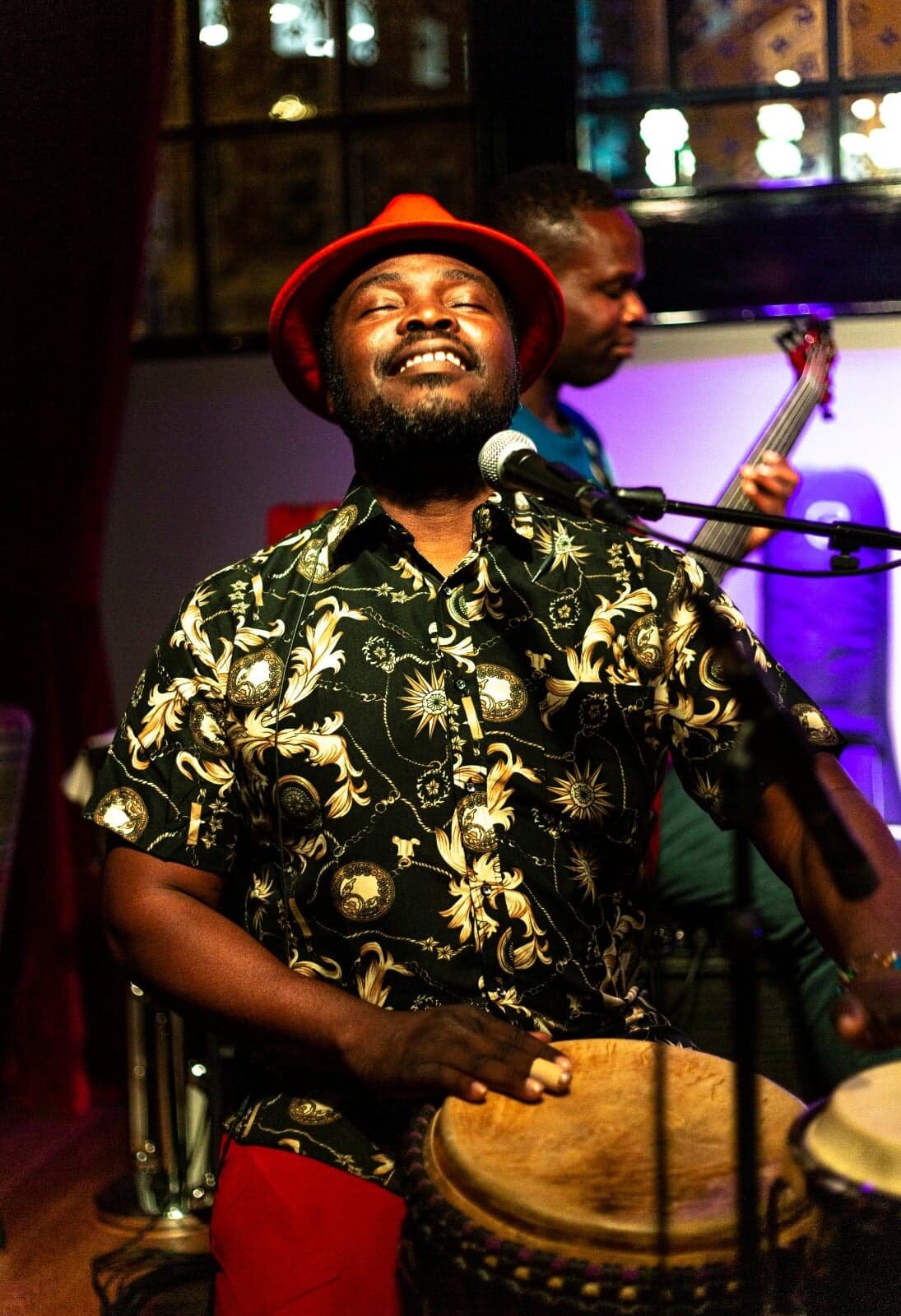 The EFG London Jazz Festival is the capital’s biggest pan-city music festival, taking place annually in November, which has long been acclaimed for showcasing a heady mix of talent from around the world. Widely acknowledged for delivering world-class artists and emerging stars, the Festival continues to take jazz to a massive audience, in one of UK’s landmark music events. Following an exceptional edition last year, EFG London Jazz Festival returns with a programme of live performances by an electrifying lineup of global stars, special collaborations, and the finest and freshest music. On Saturday 12th November 2022 it is with great pleasure that we welcome Alfa Sackey & Afrik Bawantu and Dom Servini to Juju’s Bar & Stage!

Alfa’s talent has been recognised in his collaborations with an array of critically acclaimed artists including Sun Ra, Ginger Baker, Seun Kuti, Sons of Kemet, Tony Allen, Yaaba Funk, Dele Sosimi and many more.

Afrik Bawantu appeared on BBC Radio Theatre as part of their Global Beats program and followed that with a live performance at Outlook Inspirations 50’s Anniversary Awards in 2016. They are a permanent fixture at many festivals in the UK and Europe, including headline performances at Africa on the Square festival, London African Festival, Shambala, Secret Garden Party, Back2Black, Green Man Festival, Africa Utopia and Jam’in Jette Festival, Brussels.

“Afrik Bawantu blends vibrant African percussions to a funky horn section, spreading their AfroFunk energy to everyone in the audience.” THE BARBICAN

Dom Servini is a stalwart of the soulful music scene in London. As co-owner of the Wah Wah 45s record label (this year celebrating its twenty-third birthday) and resident DJ at their club and live events, as well as being an internationally respected turntablist, Dom knows not only how to rock a party, but also has the knack for finding an exciting new artist or two. Dom has been responsible for signing Hackney Colliery Band, The Milk, Dele Sosimi, Honeyfeet, Resonators and many more.

Dom is a festival regular and has played We Out Here, The Big Chill, Soundwave Croatia, Lovebox, and Bestival to name but a few, as well as co-creating, DJing and hosting the Southern Soul Festival in Montenegro for seven years.

His energetic and open-minded mix of anything soulful, be it afro-beat, jazz, house or hip hop, make him a club favourite.